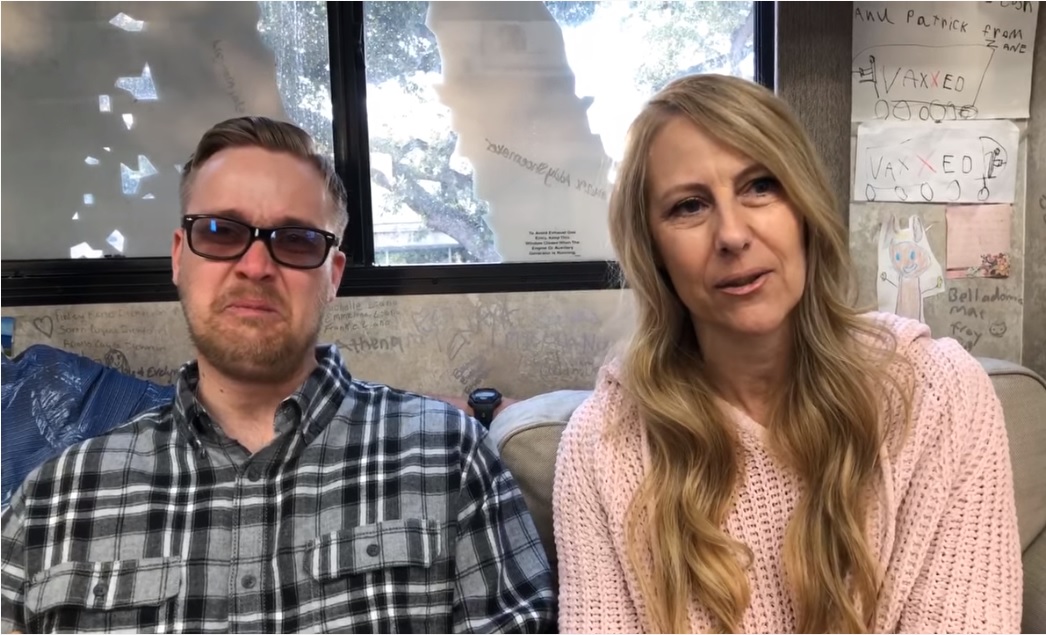 25-year-old Dillon Corder, along with his father and mother, were recently interviewed by Polly Tommey on the VAXXED II tour bus in California.

Dillon speaks with difficulty as a result of his vaccine injuries suffered as an infant, and during the course of the interview he asked his mother, Elizabeth Corder, to read something he wrote about his life growing up as a vaccine-injured child.

Hi, my name is Dillon.

From day one, I’ve had physical therapy, speech therapy, and OT (occupational therapy.)

It was hard growing up. I didn’t have many friends. It was hard to make friends because of my speech problem.

When people cannot understand me they ask “what” a million times and I get frustrated.

My first memories of school are not about school. They are all about all of the therapies.

In sixth grade I started realizing things were different for me. At school they started asking me questions about why things in class were always different for me, and why I had an aide.

As I got older, I had thoughts of suicide, and I was often depressed because things in my life were taken from me.

When the other 15-year-olds were learning to drive, it was something I could not do, and still cannot do.

When I asked girls out they always said “no.”

I know it was hard because of my speech. Even if a friend or girl wanted to meet up or hang out, I had to ask my mom or my dad if they could take me or drive me, because I couldn’t drive, and it was very embarrassing.

Sometimes I am angry at my parents, because why didn’t they know?

If I could change one thing, I would ask my parents and other parents to be educated before they made this decision to give shots that can injure and kill to your perfect baby.

I know it’s not really their fault, because they just didn’t know. But it still makes me mad that they were not informed by the doctors.

Just look at the ingredient list. It’s just not worth the risk of having a child who can’t talk anymore. The ingredients alone are disgusting and dangerous.

So much has been taken from me. I’m 25 now, and I wanted to be a cop like my dad, or go in the military. I can’t do either of those things now.

How will I find a wife and have a family or kids to be happy in life?

I just want people to know to get educated before they make this decision, because if someone gets injured, it’s for lifetime.

On December 15, 1994, when Dillon was four months old, he received his 4-month vaccines.

A couple of weeks later, he started having seizures, and went into a coma. An MRI of his brain showed acute disseminated encephalomyelitis (ADEM).

Elizabeth was given a book on vaccine injuries, and asked the doctors if his condition could be caused by an adverse reaction to vaccines, but she reports that 15 different specialists told them that this was impossible.

But after ruling out all other possibilities after extensive lab work, they reportedly sent Dillon’s MRIs to Columbia University, where everyone agreed that his ADEM was caused by vaccines.

At this point, the doctors did not even know if Dillon was going to wake up from his coma and live.

13 days later he did come out of his coma as they reduced his anti-seizure medications.

The infectious disease specialist and the pediatrician at the time, along with other doctors treating Dillon, concurred that his risk for further vaccine injuries were increased, and advised the parents to stop vaccinating him.

But they had filed a report with VAERS, the government Vaccine Adverse Event Reporting System, and so the CDC had contacted the parents, and they reportedly told the parents that they did not have enough statistical data to advise the parents to stop vaccinating, and that they should continue his vaccinations and just monitor his reactions, advising the CDC if he had any more adverse reactions.

But to us as parents, we were saying, “he’s in a coma with seizures and he’s almost dead, and you want us to do this again?? Are you crazy??”

The Corders ending up filing a claim with the National Vaccine Compensation Program, but after 5 years of legal battles, where the Special Master reportedly refused to allow them to call specialists as witnesses, even though the government called their own special witnesses to testify against the family, the family was reportedly denied compensation for Dillon’s vaccine injuries.

The State of California: Home of the Vaccine Injured

The tragic story of the Corder family in California happened in the late 1990s.

The doctors who treated Dillon back in the 1990s and recommended that his parents stop vaccinating him, would probably be breaking the law today in California if they offered the same advice. Many doctors in California today face losing their medical licenses and careers if they recommend any child, even one already damaged by vaccines such as Dillon, to stop receiving vaccines.

With the most repressive childhood vaccine laws in the nation, what will happen to California when all of these vaccine-injured children become disabled adults, as what happened to Dillon?

Dillon is very fortunately to have parents and a loving family to take care of him.

But what about those with no family support, especially among the poor? California already has the worst homeless problem of any other state in the U.S.

Where will all of these vaccine-injured children go when they become adults, as the medical community refuses to acknowledge that their disabilities are due to vaccine injuries?

Natural Remedies To Treating Ringing in the ears Source: Flickr

A strong proponent of practicing sustainably, Amy Ippoliti’s “Yoga For