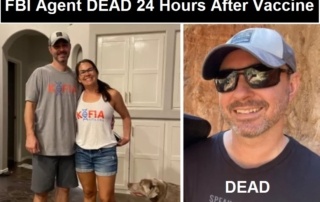 by The COVID World

Geoffrey Young, an FBI special agent, got the shot on April 17th. Within hours, Geoffrey had several symptoms including a headache and nausea.

His wife checked on him in bed many times because he was rustling around, but he seemed fine, and they thought the side effects were normal.

The next time she saw him several hours later, he was blue, and his arm stretched out hanging off the bed. He wasn’t breathing and he was eventually pronounced dead.

“My husband very much so believed in freedom,” his wife, Ona, said in an Instagram video.

“So much so that he went to work every day to support our freedoms, and to fight for our freedoms. He trusted science, he went and got his shot. He did before it was told that you have to go get this, he did. And he would giggle at me and tell me ‘Ona, you’re being silly, it’s okay. Don’t worry about it. Millions of people are getting them, and they’re fine. We’re gonna be okay.’

Read the full article at The COVID World.