The coronavirus disease 19 (COVID-19) pandemic, which was caused by the emergence of the severe acute respiratory syndrome coronavirus 2 (SARS-CoV-2), has adversely impacted the health of people throughout the world. To date, over 584 million have been infected with SARS-CoV-2, of whom over 6.4 million have died.

The clinical symptoms of COVID-19 can range from cough, fever, and sore throat to mild or severe pneumonia and acute respiratory distress syndrome (ARDS).

The spread of other epidemic respiratory diseases during the cold season increases the risk of co-infections with two or more respiratory pathogens.

One of the most common respiratory pathogens is the influenza virus, which has previously been reported to co-infect with SARS-CoV-2. Both these viruses have similar transmission routes and cause comparable clinical symptoms after infection.

Several recent studies have suggested that influenza infection can facilitate the entry of SARS-CoV-2 inside host cells, subsequently leading to severe pneumonia and lung lesions. Co-infection with influenza and SARS-CoV-2 has also been reported to cause severe weight loss and a higher number of deaths in mammals. Therefore, there is an urgent need to develop a combined vaccine capable of providing protection against both SARS-CoV-2 and influenza.

Recently, messenger ribonucleic acid (mRNA)-based vaccines with a lipid nanoparticle (LNP) delivery system have been used to mitigate the spread of SARS-CoV-2. Several mRNA vaccine candidates against influenza and other respiratory diseases are currently under different developmental stages.

A new npj Vaccines study describes the efficacy of an mRNA vaccine referred to as ARIAV that encodes the hemagglutinin (HA) antigen of influenza A virus (IAV) H1N1. ARIAV was then incorporated into a previous LNP-encapsulated mRNA (mRNA-LNP) vaccine (ARCoV) that encodes the SARS-CoV-2 receptor-binding domain (RBD) to design a combined vaccine formulation referred to as AR-CoV/IAV. 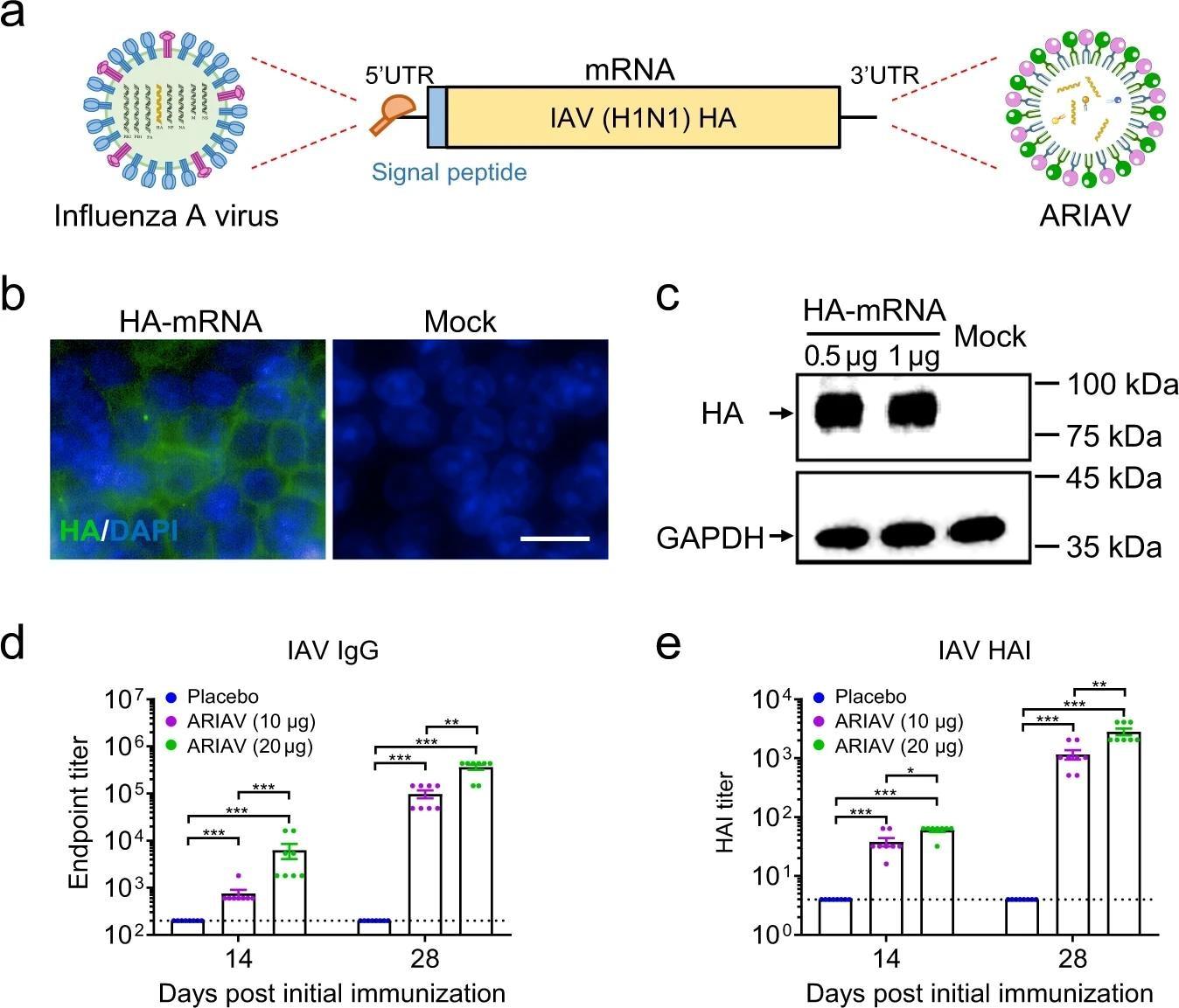 The study involved the synthesis of mRNA that encoded the full-length HA of IAV and the SARS-CoV-2 RBD, followed by LNP formulation of the mRNA and transfection. Six- to eight-week-old female BALB/c mice were immunized with equal doses of ARIAV, AR-CoV/IAV, or placebo, which was followed by a booster dose 14 days later.

Serum samples were collected from the mice before administration of the vaccines, as well as 14 and 28 days post-administration. Some of the mice were sacrificed post-challenge with either of the viruses or co-infection with both viruses for histopathological analyses and viral detection.

ARIAV was found to induce an HA-specific IgG antibody response, as well as an increase HAI titers that continued to rise after booster immunization in a dose-dependent manner. Immunization with two doses of AR-CoV/IAV provided protection against IAV and SARS-CoV-2 infection.

AR-CoV/IAV was observed to activate antigen-specific CD4+ and CD8+ T-cell responses, along with the secretion of several cytokines, including interleukin-2 (IL-2), tumor necrosis factor- α (TNF-α), and interferon γ (IFN-γ).

Furthermore, AR-CoV/IAV immunization protected infected mice from severe weight loss. This vaccine was also found to protect against infection with the SARS-CoV-2 Alpha and Delta variants. Additionally, AR-CoV/IAV vaccination reduced the levels of proinflammatory cytokines and chemokines, as well as provided protection against IAV and SARS-CoV-2 co-infection.

The current study demonstrated that a combined mRNA vaccine is capable of inducing broad and durable protection against co-infection with SARS-CoV-2 and IAV, as well as against multiple SARS-CoV-2 variants. Further development of universal vaccines is important to control the COVID-19 pandemic, as well as the spread of other respiratory viruses.