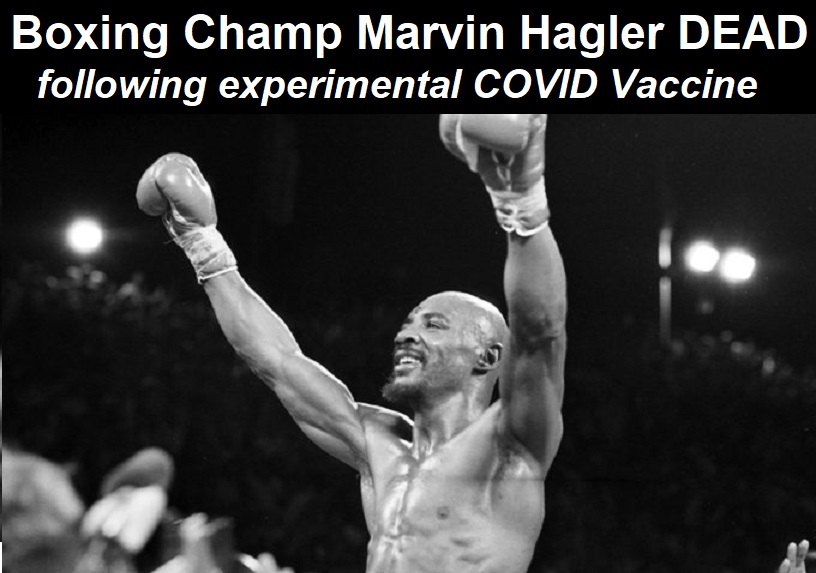 I am sorry to make a very sad announcement. Today unfortunately my beloved husband Marvelous Marvin passed away unexpectedly at his home here in New Hampshire. Our family requests that you respect our privacy during this difficult time. With love, Kay G. Hagler

Earlier in the day Saturday, fellow boxing legend Thomas “Hitman” Hearns, who fought in the ring against Hagler in the 1980s, asked fans to pray for Hagler via his Instagram account, because he was in the ICU following an experimental COVID shot.

A real true warrior Pray for the king and his family.. he’s in ICU fighting the after effects of the vaccine! He’ll be just fine but we could use the positive energy and Prayer for his Full Recovery !

TMZ reported that one of Hagler’s sons said his father was hospitalized Saturday “after experiencing trouble breathing and chest pains at home.”

One of Hagler’s sons, James, tells TMZ his father was taken to a hospital in New Hampshire earlier on Saturday after experiencing trouble breathing and chest pains at home.

We’re told about four hours later, the family was notified he’d passed away. A cause of death is still unknown at this point … it’s also unclear if Hagler’s death is COVID related.

Thomas Hearns apparently took some criticism for mentioning the fact that Hagler had received one of the experimental COVID shots, because the Daily Mail reported that later Thomas Hearns wrote:

Allow us to have our peace. Our love and respect to Marvin and his family, this is not an anti vaccine campaign… it’s outrageous to have that in mind during the passing of a King, Legend, Father, Husband and so much more.

It is not clear from the Daily Mail just where this was posted.

But if you do a news search on Marvin Hagler right now, you will see that almost none of the corporate media in the U.S. is mentioning anything about the “vaccine.”

Hearns probably had no idea how his simple post on his Instagram account mentioning that Hagler was “in ICU fighting the after effects of the vaccine” would bring the pro-vaccine pro-pharma crowd out in mass to probably label him as an “anti vaxxer” and vilify him just for reporting such a basic fact.

Similar to other high profile people who have died just after receiving a COVID experimental injection, such as Hank Aaron and Larry King, there appears to be a major effort by the pharma-controlled corporate media to withhold this information from the public.

How long can the corporate media continue hiding these deaths that happen after the experimental COVID injections?

Or the bigger question is, how long will the public continue watching, reading, and listening to the corporate media in the U.S., which is clearly funded and controlled by the CIA and the Wall Street Billionaires who are profiting so richly from the COVID vaccines? See:

The CIA and The Corporate Media Cannot be Distinguished: The Censorship of the Alternative Media