Cheslie Kryst’s High-Functioning Depression: What a Psychiatrist Wants You Know About This Invisible Illness

Former Miss USA Cheslie Kryst, 30, died by suicide on January 30, 2022. Kryst was the oldest contestant to ever win Miss USA at age 28 — just one of her many successes in life.

Kryst was also an attorney in North Carolina who fought for legal reform and provided pro bono legal services to people who received unjust prison sentences. She was an entertainment news correspondent for Extra, a fashion blogger who founded the blog White Collar Glam, and a volunteer for Dress for Success, a global nonprofit organization that empowers women to achieve economic independence.

With a list of accomplishments as long as Kryst’s, you might never have guessed she lived with depression.

“In her private life, she was dealing with high-functioning depression, which she hid from everyone — including me, her closest confidant — until very shortly before her death,” said Kryst’s mother, April Simpkins, in a statement to Extra.

Kryst’s depression was so well-hidden that even people close to Kryst thought the news of her death must have been a mistake. Broadcast journalist and TV personality Gayle King, who became friends with Kryst after interviewing her in 2019, said she had never noticed any warning signs in Kryst. “That’s part of the reason I’m so gutted by the news — and I know I’m not the only one who feels this way,” King wrote in a piece for Oprah Daily.

What to Know About ‘High-Functioning’ Depression and Suicide Risk

Kryst’s story has gotten people talking about depression, suicide, and what the warning signs of both look like. Here are five lessons to add to the conversation, according to Allison Young, MD, an adjunct professor of psychiatry at the New York University Grossman School of Medicine in New York City and a psychiatry medical reviewer for Everyday Health.

“High-functioning” depression is not recognized as an official diagnosis, says Dr. Young. The term “high-functioning” is more of a descriptor that highlights persisting stereotypes about depression, including the notions that people with depression are low-functioning or lethargic, can’t get out of bed, or simply aren’t pushing themselves enough to overcome their limitations, she explains.

In reality, depression exists on a spectrum — it’s not a one-size-fits-all condition. People with the same diagnosis of major depression may have entirely different experiences, says Young. And without knowing someone’s private life well, it’s hard to know where they sit on this spectrum.

For instance, one person may be the stereotypical depressed person who is lethargic, moving slowly, eating less than usual and has lost weight, and can hardly get out of bed.

Or in other cases, people with high-functioning depression may experience those typical symptoms of depression, but they’ve developed ways to hide it. They may be spending most of their time in bed when not interacting with others, have no appetite but eat anyway to avoid losing weight, or conserve all their energy for outings with friends.

The way depression impacts one’s ability to function can also differ from person to person — they may be high-functioning in some ways, but not others. “The interference with functioning could be an inability to have an intimate relationship or even significant distress regarding how someone relates to self, which will be a much more private experience than a loss of occupational functioning, for example,” Young explains.

Regardless of whether someone with depression is “high-functioning” or “low-functioning,” they have a mental health condition that needs treatment. But many people don’t seek help because they don’t think their depression is severe enough to warrant help, says Young.

“There’s a lot of ideas about how bad it should look before people go get help,” Young explains. But it’s never too early for you to seek help if you need it, she adds.

In fact, while depression can be successfully treated no matter how severe it is, treatment is often most effective when started early, states the National Institute of Mental Health. This means the sooner you talk to your doctor or a mental health professional about what you’re experiencing, the better.

According to Young, there’s a misconception that depression follows a predictable script in which it starts out mild and progresses to moderate and then severe, with suicide being considered “end-stage depression.” This is not true, says Young.

Depression isn’t a progressive illness with a predictable outcome, and there are no set stages for depression as there are in other diseases such as cancer, Young explains.

4. Depression, Even if High-Functioning, Is a Risk Factor for Suicide

Depression is known to raise one’s risk of suicide — and even if someone is high-functioning, they’re still at risk. But someone whose depression doesn’t resemble the stereotypical picture of this disorder may mistakenly think they need to just “suck it up.” These feelings can be stigmatizing and may keep someone from getting the help they need, Young says.

Other risk factors for suicide, according to the National Institute of Mental Health, are:

5. Not All People Who Die by Suicide Show Warning Signs

It’s hard even for experts to predict with certainty which people with depression or other mental health concerns will have suicidal thoughts or behaviors, Young says. “It’s so much more complicated than just seeing someone who’s suffering and then knowing that suicide is going to be the outcome,” she explains.

For instance, many people with severe depression consider suicide for a long time and visit the emergency room once or more because of it, explains Young. They often end up at the emergency room because they show the typical warning signs of suicide, such as:

But not everyone who dies by suicide shows these telltale signs beforehand, warns Young. “There’s this whole other group of people who we never have the opportunity of being seen in emergency psychiatric department because even if they’re thinking about suicide, they never show outward signs,” she says.

Suicide can also be spontaneous and impulsive, making it even more unlikely that warning signs would be seen in advance. “I want people to know they can give themselves grace if they’ve had a loved one [die by suicide] because it’s not that easy to know and predict,” adds Young.

If you or anyone you know is struggling with thoughts of suicide, please contact the National Suicide Hotline by dialing 1-800-273-8255. If you need immediate assistance, dial 911 or go to the nearest hospital.

A delicately foaming facial wash to detoxify and rebalance normal 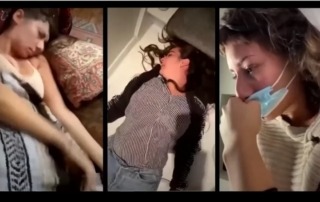 Screen capture from Real Not Rare video. by Brian Shilhavy

Power Yoga: Why To Go For It & How Is It Different From The Other Yoga Types

Physical exercise and activity is of utmost importance to keep