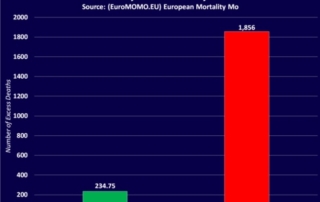 An exclusive investigation carried out by the team here at The Exposé has forced the European Union’s official statistics department to begin a Europe-wide investigation into why there has been a significant increase in excess deaths among children aged 0 to 14 since the European Medicines Agency approved the Covid-19 injection for children.

On the 29th of August 2022, we exclusively revealed that official mortality figures for Europe showed a shocking 691% increase in excess deaths among children up to week 33 of 2022 since the European Medicines Agency extended the emergency use authorisation of the Pfizer Covid-19 vaccine for use in children aged 12 to 15 in May 2021.

Before this decision by the European Medicines Agency, deaths among children in 2021 were below the expected rate. But following the emergency use authorisation, we discovered that excess deaths among children had risen by a deeply troubling 1,599% by the end of the year compared to the 2017 to 2020 average.

Now, three weeks after our investigation, EuroMOMO, which provides the statistics, has been forced to officially acknowledge the elevated excess mortality among children and has opened a Europe-wide investigation into the possible causes.

We conducted our investigation using the data published by EuroMOMO in their week 33, 2022 bulletin.

EuroMOMO failed to mention the elevated mortality among children aged 0 to 14.

However, three weeks on from our investigation they have been forced to do so as can be seen in a snapshot of EuroMOMO’s week 36 bulletin –

EuroMOMO also added a further note in its week 36 bulletin –

Upon realising that we have forced EuroMOMO to finally investigate why so many children are dying across Europe, we decided to revisit the official published data to find out how many more children had died between week 33 and week 36. But to our surprise and disgust, we discovered that EuroMOMO has now altered the baseline meaning all data on excess deaths from 2017 through to 2022 has been altered since our week 33 investigation.

The following is a snapshot of the data made available by EuroMOMO in week 36, and it shows 545 excess deaths among children aged 0 to 14 up to week 36 in 2022.

However, the following is a snapshot of the data made available by EuroMOMO in week 33, and it shows 841 excess deaths among children aged 0 to 14 up to week 33 in 2022.

This means EuroMOMO has now altered the baseline since our investigation to artificially reduce the severity of the number of excess deaths among children aged 0 to 14.

We are able to prove this thanks to the gift of the ‘WayBackMachine’ which is an Internet Archive of most pages available on the world wide web. The archived page showing the week 33 data can be viewed here.

Because of EuroMOMO’s extremely suspicious decision to alter the baseline at the same time as opening a Europe-wide investigation into the extraordinary rise in excess deaths among children since the European Medicine Agency’s decision to approve the Covid-19 vaccine for children, The Exposé will be urgently conducting another investigation into the rise in excess deaths based on the altered baseline.

Read the full article at The Exposé.

The post EU Begins Europe-Wide Investigation into 700% to 1600% Increase in Excess Deaths Among Children Since EMA Approval of COVID Vaccine first appeared on Vaccine Impact.