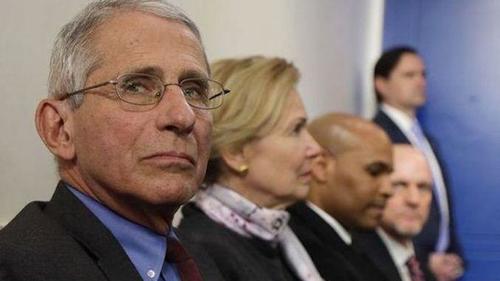 Did Fauci Just Admit He Lied About Herd Immunity To Trick Americans Into Vaccine?

Dr. Anthony Fauci, the Democrat-approved ‘science’ in ‘trust the science,’ appears to have just admitted to lying about COVID-19 herd immunity in order to goad more people into taking the vaccine, according to a new report in the New York Times.

At issue is the percentage of the population which must require resistance to the coronavirus – through infection or vaccination – in order for the disease to disappear.

Early into the pandemic, Fauci repeatedly claimed ‘60-70%‘ herd immunity was required to achieve herd immunity. Beginning around a month ago, however, Fauci’s estimate drifted higher – to “70, 75 percent,” and more recently telling CNBC “75, 80, 85 percent” and “75 to 80-plus percent.”

When asked about it, Fauci essentially said he lied for political purposes due to vaccine skeptics.

In a telephone interview the next day, Dr. Fauci acknowledged that he had slowly but deliberately been moving the goal posts. He is doing so, he said, partly based on new science, and partly on his gut feeling that the country is finally ready to hear what he really thinks.

Hard as it may be to hear, he said, he believes that it may take close to 90 percent immunity to bring the virus to a halt — almost as much as is needed to stop a measles outbreak.

Asked about Dr. Fauci’s conclusions, prominent epidemiologists said that he might be proven right. The early range of 60 to 70 percent was almost undoubtedly too low, they said, and the virus is becoming more transmissible, so it will take greater herd immunity to stop it.

Dr. Fauci said that weeks ago, he had hesitated to publicly raise his estimate because many Americans seemed hesitant about vaccines, which they would need to accept almost universally in order for the country to achieve herd immunity.

And with polls now suggesting more Americans are willing to take the vaccines, Fauci (who said in November COVID-19 ‘won’t be a pandemic for much longer‘) says he’s ready to come clean.

“When polls said only about half of all Americans would take a vaccine, I was saying herd immunity would take 70 to 75 percent,” he said, adding “Then, when newer surveys said 60 percent or more would take it, I thought, ‘I can nudge this up a bit,’ so I went to 80, 85.”

“We need to have some humility here,” Fauci then said. “We really don’t know what the real number is. I think the real range is somewhere between 70 to 90 percent. But, I’m not going to say 90 percent,” because doing so might discourage Americans.

The Times’ Ross Douthat called Fauci out for shifting the goalposts.

When you can’t just “trust the science” because the scientists keep lying to you and then saying, “oh, that was just a noble lie, sorry about that.” https://nytimes.com/

Read the full article at ZeroHedge.com.

We Are Now on Parler, MeWe, and Gab!

If our website is seized and shut down, find us on Parler, MeWe and Gab for further instructions about where to find us.

No connection between autism and vaccines, new study confirms

Picking the right workout plan for your body

Finding a training plan that delivers results can be quite difficult.

The Art of Living Foundation is an international NGO, focused