If you think organic food is expensive, try cancer

For two years running South Africa has been named as the most unhealthy country in the world. And Angus McIntosh (Farmer Angus) is determined to do something about it.

The writer supports The Hope Exchange, a group of people who provide food for the homeless in Cape Town. Please help them here.

Farmer Angus McIntosh has the intense look of someone with a single dream like skateboarding to the South Pole. He wears a slightly ingenuous expression, as if he has just been born into a new world and finds everything curious and a bit disturbing.

With a background as a trader for Goldman Sachs in London, there is a hint of cufflinks and striped shirt in his farmerish attire and smooth talk. However, his verbal spritz no longer sprouts derivatives and hedge funds but involves a passion for environmentally friendly farming.

And boy do you need passion. In a world where farming is a big industry (visiting a farm in the USA is hazardous because of free floating poisons), following a dream of clean food is a kind of madness.

Farmer Angus’ farm is situated on 126 hectares of irrigated pasture at Spier Wine Estate near Stellenbosch. It is a place that ignites the heart with its well cared for animals, green pastures, vegetable gardens and on site butchery. A friend calls it “fairyland”.

The farm arguably hosts the Cape’s best non-industrial food production. The eggs are yolky and delicious and the meat which can be ordered online is clean and tastes like meat used to taste. Remember? Before feedlots, pesticides and hormones.

About six years ago I discovered his eggs by chance, astonished by their creamy innards and thick marigold coloured yokes. Investigating their origin, I came across Farmer Angus, moving his egg laying hens in “eggmobiles” to new outdoor pasture.

He told me then, “The biggest lie in agriculture is free range eggs. They live in barns, they don’t range outside. On commercial egg farms, chickens live and never leave a space equivalent to an A4 piece of paper.”

And it is not only the animals that are benefitting. His egg company is now 80% owned by his staff and the eggs get better and better. “I am only a 15% shareholder but it’s got my name on it,” he says.

Over the years McIntosh has developed biodynamic and regenerative agricultural practices in the raising of the farm’s animals which include cattle, pigs, chickens and laying hens, as well as vegetables and wine.

His pastured livestock and poultry are moved frequently to new pastures where they can perform basic needs such as dustbathing and flapping their wings.

Often in the past in butcheries or so-called organic groceries, I have asked about provenance. So far I have never met a retailer who has even taken the trouble to see where the food (particularly labelled as “organic”) they sell comes from.

Farmer Angus encourages people to visit the farm and see where their food is produced. Caring for the animals properly is a high priority. More and more restaurant owners around the world are keeping their own herds for the simple reason that cared for cattle produces not only the healthiest but the tastiest meat.

With farming there is so much wonkery – what irony that the salt of the earth, the food we eat is as about as full of corruption as the Zuma Cabinet.

His desire is for people from all walks of life to be able to eat better and more nutritiously and to understand what they put in their bodies. On the face of it it is a modest dream but in South Africa it is as difficult as climbing Everest in a pair of Jimmy Choos.

The challenge of agricultural sustainability has become more intense in recent years with climate change, water scarcity, degradation of ecosystem services and biodiversity, the sharp rise in the cost of food, agricultural inputs and energy, as well as the financial crisis hitting hard on South Africa.

He reels off stats with an almost cult-like enthusiasm.

“A well looked after Jersey cow that has grown up on pasture should give you 50 lactations. Do you know what the average lactation in South Africa is? Two point one. They are treated as monogastrics and fed a heavy corn diet three times a day. As a result the milk is so high in pus that they are forced to homogenise it.

“Of course people are going to be allergic to it.”

I have always wondered why so many people are “allergic to dairy”.

South Africa should be the land of milk and honey; instead it is the land of cheap chemicalised food. “We have the highest obesity rate in the world. The rural Africans understood the value of milk, a whole food, but they lost the tradition when they came to the cities to work.”

Personally, says Farmer Angus, “I think that consumers have to think about food differently and eat differently. They need to be conscious that behind a kilo of tomatoes lies a lot of work. They need to know where their food comes from and what goes into it.

“People are living on more and more processed foods, so the body is craving nutrients. The only thing that the people in agriculture agree on is that the nutrient content of food has been in decline for 120 years. The carrots your grandmother ate and the ones you eat might look the same but on a nutritional level they are entirely different.

“Most of us can grow our own vegetables, we can all make our own worm compost which is the best fertiliser of all. South Africa has got a million unemployed people. Why are they not growing their own food? Here’s why. There is a stigma attached to farmers which is why so few guys grow their own food in a place like Khayelitsha. They want to wear zoot suits and drive Beemers.”

McIntosh’s new project is producing first grade grass fed, pesticide free food at an affordable price. Last week, wandering the aisles of Checkers, I came across such usually unaffordable products as pancetta, coppa, prosciutto at a price within my budget.

Let us give thanks for the pig.

Pancetta made from the belly, coppa from the neck and prosciutto from the leg and Black Forest ham to die for from the loin, a real feast.

But not a feast for pigs, especially in South Africa. “I only know two farmers who do not cage their pigs,” says McIntosh. The European Parliament’s Agriculture Committee has recently called on the European Commission to propose a revision of the EU directive on farmed animals with the objective of phasing out the use of cages in animal farming.

McIntosh’s move to supermarket selling is not only significant because people like me can afford to buy it but it is the first time that grass-fed beef is being sold at the same price as feedlot products.

“But more important,” says Farmer Angus, “this is a truly costed item. The beef you buy in a shop is not really costed, the antibiotic resistance is not costed, the inflammatory diseases you get are not costed. There is a whole lot of stuff that is not in the price, so true cost accounting is another thing that has to be on the table in order to keep any ethical enterprise going.”

“We have the space, we have the weather, all we need is the absolute desire for better nutrition.

“And there are rewards. The carbon in our soil has increased and we get paid credit for that. What people don’t realise is that the vegan diet that everyone is trying to ram down our throats is destructive to the ecology. Whereas this is generative to the ecology. In the vegan utopia there are no animals, so how do they make the food for the plants? They can’t make animal based fertiliser or compost so they have to use chemicals.

“Actually, we have no choice. We go the ethical route or we die.”

As Joel Saliton, a farmer in the USA famous for his ethical practices, says, “If you think organic food is expensive, try cancer.” DM/TGIFood

A study 2020 conducted by the insurance comparison website Compare The Market, which ranked the healthiest and unhealthiest countries – all part of the Organisation for Economic and Co-operation Development, found that South Africa is the “unhealthiest country in the world”.

A separate study, The Indigo Wellness Index, which tracks the health and wellness status of 151 countries, also found South Africans were dangerously unhealthy and ranked SA the unhealthiest country in the world in 2019. Meanwhile, in 2016, the World Health Organisation (WHO) estimated 28.3% of adults in South Africa were obese. This was the highest obesity rate for the sub-Saharan African countries recorded by the WHO.

Everybody has an opinion but not everyone has the knowledge and the experience
to contribute meaningfully to a discussion.
That’s what we want from our members. Help us learn with your expertise and insights on articles
that we publish.
We encourage different, respectful viewpoints to further our understanding of the world.
View our comments policy
here.

I read this article with interest until I reached the final paragraph in which Farmer Angus states authoritatively: “… the vegan diet… is destructive to the ecology.” It is in fact quite the contrary. The deforestation occurring in the Amazon is being done to clear land to grow soya beans, the second largest component in an industrial animal diet after maize. 80% of the maize and soya produced globally goes into animal production. If all humans on earth converted to a vegan diet we would need far less land to produce for our food requirements and thus vast tracts of land could be “rewilded”.

I’m happy for Farmer Angus that he is proud of his regenerative farming techniques. The fact is that if all meat demand was to be catered for with this approach, the land area required would be equivalent to 5 planet Earths. He would be wise to concern himself with his own farming operation instead of making ostensibly informed, but ultimately starkly ignorant, statements about meat production and consumption.

Thanks Raymond, but I don’t think you read my comment. You refer to organic farmers being subject to a voluntary standard, which is the point of what I said. Regardless of the admirable efforts of SAOSO, if the standards are voluntary then they are by definition unregulated (as I said), meaning that anyone can claim to be an “organic” farmer and not face legal consequences. Hence why terms such as “free-range”, “cruelty-free”, “sustainably farmed” and indeed “organic” have little credibility is SA, as I’m sure you would know. 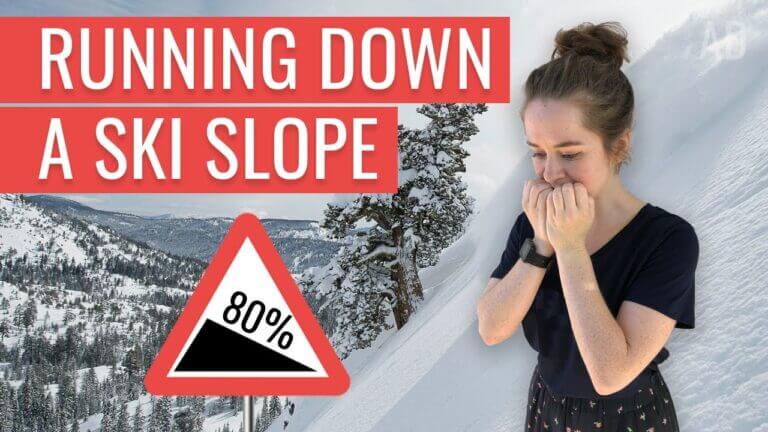 If you take one ski slope and 2 runners, what 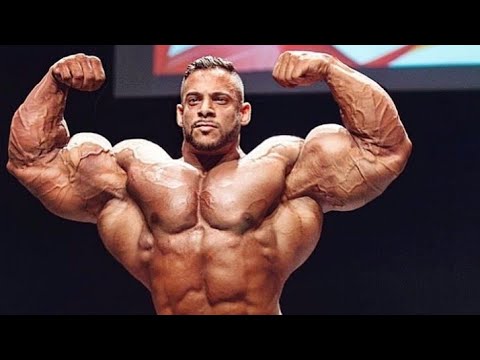 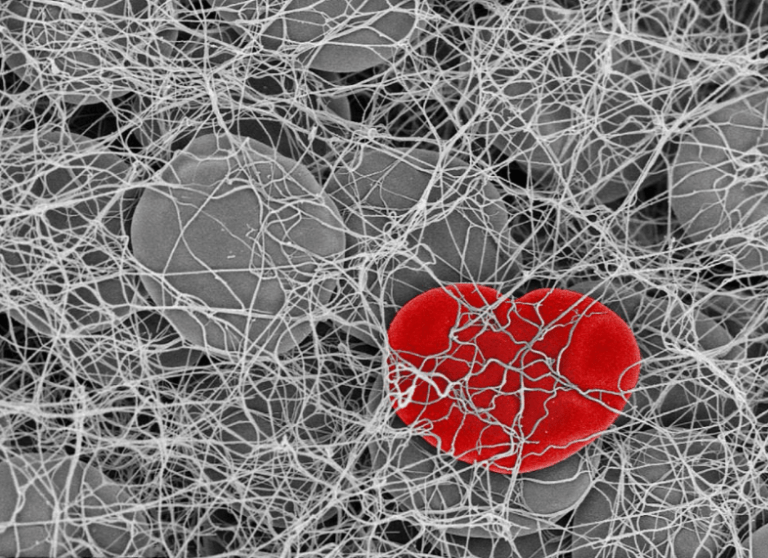 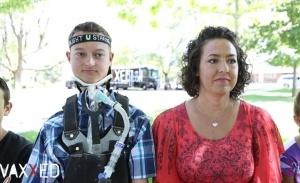 Colton Berret and his mother were interviewed on the bus