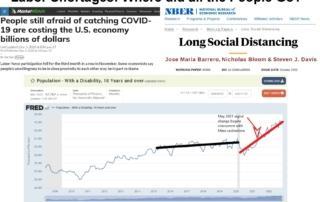 With the United States labor force declining for the third month in a row here at the end of 2022 and now nearly 3 years since COVID-19 started, the corporate media is getting desperate to explain this trend without considering the impact the experimental COVID-19 vaccines have had in causing deaths and disabilities in the U.S. labor force.

Just as the CDC came up with the term “Long COVID” to explain lingering disabilities and injuries that are putting pressure on the medical system and insurance industry (see: “Long COVID” is the Term Now Used to Cover Up COVID Vaccine Injuries as Health Insurance Companies Face Financial Collapse), now economists have come up with a similar term: “Long Social Distancing.”

“Long Social Distancing” is allegedly costing the U.S. economy “$250 billion” and is described as “people’s unwillingness to be in close proximity to each.”

More than two years after the coronavirus pandemic began, social distancing is keeping some workers from going back to work.

That’s according to this working paper distributed by the National Bureau of Economic Research. Some people are not prepared to let their guard down — in the knowledge that COVID-19 has not gone away. Some 13% of American workers say they will continue social distancing as the economy opens up and cases fall, and another 45% said they will do so in limited ways. Meanwhile, only 42% of those workers said they plan a “complete return”.

The study, entitled “Long Social Distancing,” estimated that people’s unwillingness to be in close proximity to each other has reduced labor participation by 2.5 percentage points in the first half of 2022 compared to what economists would normally expect to see — translating to $250 billion in potential annual output, representing nearly a 1 percentage-point drop. (Full article.)

You can’t make this stuff up folks! It is unbelievable the lengths they will go to in order NOT to discuss the impacts the COVID vaccines have had on the labor force.

This is what they were saying a month ago when it was becoming obvious that there was a problem with the labor force extending well into 2022:

Why are there so few workers for so many open jobs? It’s one of the biggest mysteries surrounding the U.S. economy and helps explain why a big labor shortage is adding to high inflation.

The share of people in the labor force fell again in October and remains more than a percentage point below its prepandemic peak.

That might not sound like much, but it is. The smaller percentage of people who are part of the labor force suggests some 1 million to 2 million people who normally would be working are not.

Since there are not enough workers to go around, businesses have to pay more to retain or attract workers. Wages are rising at the fastest pace since the early 1980s and adding to the Federal Reserve’s worries about inflation.

The numbers tell the story.

The so-called labor-force participation rate dipped to 62.2% in October, a few ticks below the pandemic high. And it’s still well below the precrisis level of 63.4%.

Just what does this mean? Only 62.2 of every 100 able-bodied Americans 16 or older are working or looking for work.

By now, the Fed and most private-sector economists had expected more people to enter or re-enter the labor force. Had they done so, companies would find it easier to hire and wouldn’t have to raise pay quite as much.

Where are all the missing workers? (Full article.)

Edward Dowd remains one of the few financial experts in the U.S. who has linked the downturn in the labor force to the roll out of the COVID vaccines in 2021. This is what he posted on his Gettr account today:

Total US disabilities as reported by the US Bureau of Labor Statistics:

So simple but yet our health authorities are silent. We call this a trend change on Wall Street…so much so that the year over year rate of change represents a 3.7 standard deviation as of 3/2022. In layman’s terms I would call this a growth stock as the trend has changed considerably with an upward bias that looks sustainable to me.

How long can the corporate media and the U.S. Government continue to play this game, before a critical mass of the population wakes up and figures out they’ve been deceived and that the vaccines are killing and maiming people?

Those remaining in the workforce are enduring difficult work conditions with less pay due to inflation, and major labor unrest is brewing all across the globe.

As we previously reported, the U.S. Government has now forced the railroad unions to accept a new labor contract they are not happy with, which seriously threatens the U.S. economy. See:

We have also previously reported that the U.S. medical system lost 334,000 employees in 2021, and is still bleeding labor losses in 2022:

The U.S. Medical System is Collapsing after Mass Exodus of Doctors and Nurses

In the UK, the government has put hundreds of soldiers on stand-by to cover for ambulance crews, firefighters, and Border Force staff as a wave of strikes are reportedly set to disrupt crucial public services in the run-up to Christmas.

The UK government has put hundreds of soldiers on stand-by to cover for ambulance crews, firefighters, and Border Force staff as a wave of strikes are set to disrupt crucial public services in the run-up to Christmas.

According to the Cabinet Office, about 2,000 British military personnel, civil servants, and volunteers from across government have been training as part of the government’s contingency planning.

They include up to 600 armed forces personnel and 700 staff from the government’s specialist Surge and Rapid Response Team, as well as from other parts of the civil service.

The Cabinet Office said no decisions had been taken yet on the deployment of troops, but that they were part of the “range of options available” should the strikes go ahead as planned.

Conservative Party chairman Nadhim Zahawi said it is the “right and responsible thing to do” as ministers seek to minimise the disruption to the public.

A number of unions across public services are preparing to carry out strike action or ballot their members over pay disputes.

The National Health Service (NHS) is under pressure as ambulance workers in three unions voted last week to strike over pay and concerns about staffing levels. The Royal College of Nursing is also staging two strikes this month and junior doctors are set to be balloted on industrial action.

Meanwhile, more than 33,000 firefighters and control room staff started voting on Dec. 5 on whether to take industrial action over a 5 percent pay rise, which the Fire Brigades Union (FBU) said is “derisory.”

There is expected to be widespread disruption to transport in the run up to Christmas with further rail strikes, walk-outs by baggage handlers at Heathrow Airport, and possible action by Border Force staff. (Full article.)

Right Wing Politicians Admit the COVID Shots Have Killed and Injured People – So Why are we Still Injecting People, Including Children?? 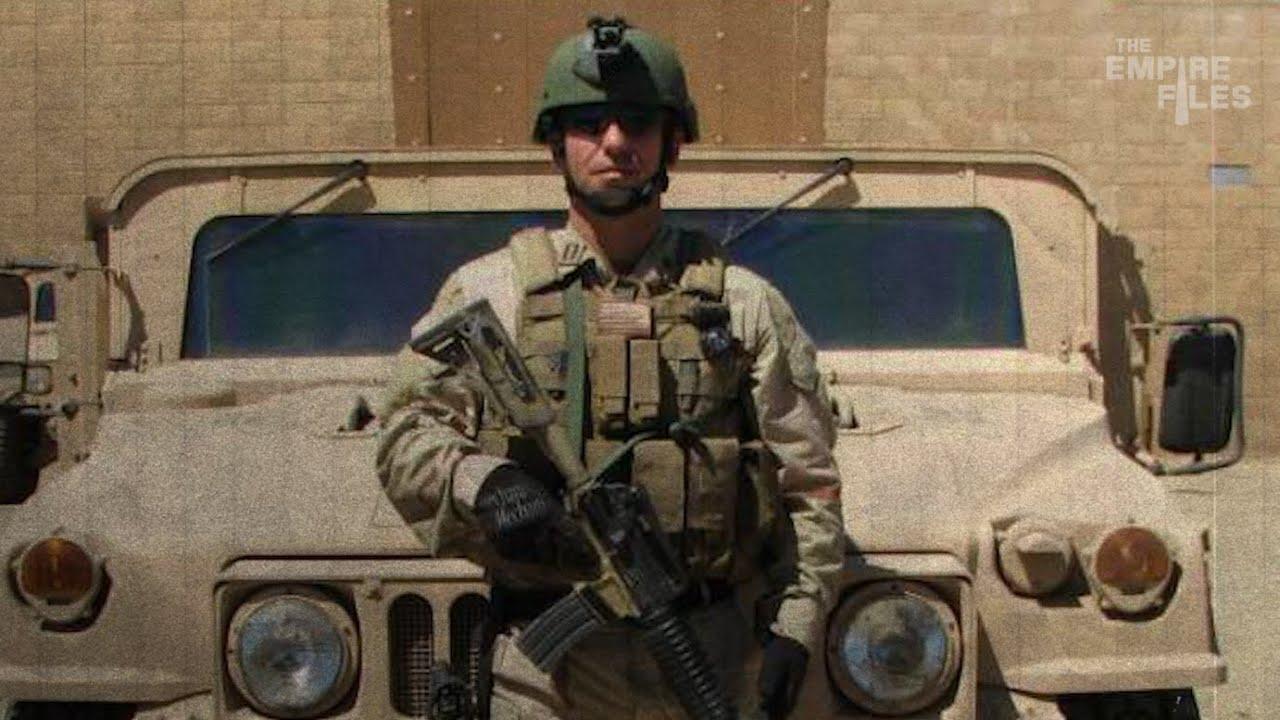 Right Wing Republican politicians and media sources are increasingly exposing the damage caused by the experimental COVID vaccines, and Florida Governor Ron DeSantis recently stated that he was going to “hold these manufacturers (Pfizer and Moderna) accountable” for making false claims about COVID products that have caused injuries and death.

At a private event over the weekend, Governor Ron DeSantis said that his administration intends to hold vaccine manufacturers accountable for making false claims about COVID products that have caused injuries and death.

The governor said he would be working with Florida Surgeon General Joseph A. Ladapo “to hold these manufacturers accountable for this mRNA [shot] because they said there were no side effects and we know that there have been a lot.”

DeSantis made the comments at a Republican Party of Florida (RPOF) event on Saturday at the Florida Governors Mansion.

“We did a study in Florida and we saw an 86 percent increase in cardiac related activity in people ages 18 to 39 from mRNA shots and so we’re going to be doing some stuff to bring accountability there,” DeSantis told the RPOF Executive Committee members at the event. In the United States, the mRNA products are produced by Pfizer and Moderna. (Full article.)

And yet, Governor DeSantis has done nothing to stop these vaccines from continuing to injure and kill people in his State of Florida.

While DeSantis has been Governor of Florida, 47,364 injuries including 552 deaths have been reported to VAERS (Vaccine Adverse Events Reporting System) for the State of Florida following COVID-19 vaccines. (Source.)

And still they continue to inject people, including children. Here are a few cases of children in Florida who have been injected with these horrible vaccines from the past few days:

VAERS ID: 2512384: 2-Year-Old girl – Systemic: Fainting / Unresponsive-Mild, Additional Details: Pt reported to clinic for 18m – 4y COVID vaccine. Vaccine was within expiration and BUD. This is pt”s second dose. Pt was given injection by LPN and within 30 seconds patient became unconscious. Pt was unconscious for less than 30 seconds. EMS activated immediately. Pt placed on bed and sat up. Pt awake at time of provider entry into room. Vital signs assessed and pt sitting on exam table while EMS is arriving. Pt was awake and alert when EMS arrived. EMS recommended f/u at local emergency room.

Here is a 6-month-old baby boy in Florida who was given 7 vaccines in one visit, as was his twin sibling, including the COVID-19 and flu shot!!

All of this could STOP in one day with an executive order from Governor DeSantis, but that would kill his political career and his hopes of running for the office of President of the United States, since the Pro-Pharma Wall Street Billionaires and Pro-Israel lobby are the ones who support him and have put him into office.

Trump Claims he could “Easily” be Israeli PM – Is this why Pfizer Received First COVID Vaccine Authorization in U.S. and Exclusive Rights in Israel?

Is God Calling you to be a “Watchman” to Warn Others of What is Coming?