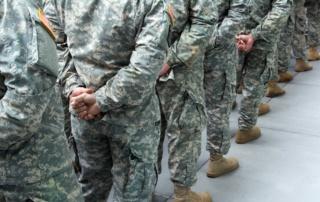 The Biden administration’s strict Covid-19 vaccination mandates place more than 13% of the US’ fighting forces at risk of discharge, according to Department of Defense data updated on Wednesday.

The Pentagon’s website shows 268,858 “partially vaccinated” individuals across the Army, Marines, Navy, and Air Force, plus another 50,710 civilian employees. However, the figures don’t include servicemembers who have had no shots at all, meaning the real number imperiled by the administration’s vaccine mandates could be significantly higher.

While unvaxxed soldiers whose requests for medical and religious exemptions are pending are supposedly exempt from the requirement, Marine Reservist Mike Berry told Breitbart that religious exemptions have only been granted to individuals already on their way out of the military.

Some 6,400 servicemembers have already been kicked out for refusing to get the shot, with the majority being Marines, according to statistics cited by Breitbart. That’s despite the fact that a court injunction has barred the Navy from discharging any sailor seeking a religious exemption. While political pushback has stopped the Pentagon from labeling the departed with a dishonorable discharge, even a “general” discharge can mean a loss of benefits and a black mark on a soldier’s disciplinary record.

The Army began stepping up administrative proceedings against the partially- and un-vaccinated last week, explaining the noncompliant would no longer receive pay as of July or be allowed to participate in “federally funded drills and training.” A statement by the military branch warns those who refuse the mandatory vaccination order “may be subject to additional adverse administrative action, including separation.”

When confronted about the effect on the US’ military readiness of potentially discharging tens of thousands of unvaccinated soldiers, Chairman of the Joint Chiefs of Staff Mark Milley downplayed the problem, insisting “the numbers are very low, by the way, of those that are refusing to be vaccinated,” calling the problem “manageable” and arguing that soldiers should just shut up and take their shots.

However, a recent study published in the Journal of the American Medical Association confirmed servicemembers are suffering serious if rare side effects from the vaccines, including myocarditis.

The US military has had a difficult time attracting new soldiers, posting its lowest recruitment numbers in decades this year. Last month, the Pentagon admitted it was 23% behind recruiting goals for the year, a problem that has been blamed on bad advertising – specifically the recent trend toward “woke” ads widely mocked on social media – and a sloppy, antiquated recruitment system that places too much responsibility in the hands of outside contractors.

Read the full article at RT.com

The post More than 260,000 American Service Members could be Discharged due to Non-compliance with Vaccine Mandates first appeared on Health Impact News.