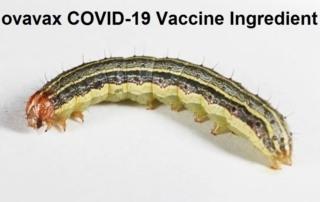 Novavax vaccine contains 1 mcg of insect (the fall armyworm) and baculovirus proteins and a bit of their DNA too, which is injected into you with each dose

You see, the vaccine’s spike protein is grown by genetically engineering baculoviruses to produce spike, and then infecting insect cells with the baculovirus to turn the whole thing into a spike protein factory.

At the CDC’s Advisory Committee on Immunization Practices meeting that I live-blogged last week, it was revealed that the Novavax vaccine was being rolled out because it could be marketed as a “more traditional” vaccine, since it was not made from mRNA. Novavax was to be directed to the unvaccinated, although only 10% of the unvaccinated, it was anticipated, would accept it.

The fact that no fetal cells were used in its development was claimed to be a marketing plus. However, thanks to a reader, it turns out that a human fetal cell line, (HEK) 293F, was used in the testing of the vaccine, as described in an article in Science.

NOTHING about this vaccine is traditional.

First, the Novavax company does not own a manufacturing plant, so the vaccine being distributed in the US is made at the Serum Institute of India.

Second, the adjuvant, Matrix-M (a nonspecific, potent immune stimulant) has never been used before. It is made from the Quillaja saponaria tree. There is another adjuvant that is only used in one (highly reactogenic) US vaccine, Shingrix, which is an extract from this tree. This GSK adjuvant, named ASO1B, contains QS-21, a single extract in the Shingrix vaccine.

The problem is that we don’t know what extracts from the tree are included in Matrix-M. The information is proprietary! The Matrix-M adjuvant uses two unspecified “fractions” from the Q. saponaria tree, and there exist no data on its safety.  (Matrix-M does not contain QS-21, although the company sometimes implies it does, to distract from its novelty.) These two fractions, combined with phospholipids and cholesterol, form the 40 nanometer particles of Matrix M.

While the tree extracts are potent immune stimulants, all those characterized also have significant toxicity.

Third, in addition to getting 5 mcg of spike protein in every dose, you will receive 1 mcg of residual amounts of baculovirus and Sf9 cell proteins (≤ 0.96 mcg), and baculovirus and cellular [from the fall armyworm] DNA (≤ 0.00016 mcg), according to theFDA.

So, you are getting an additional 20% protein of insect and baculovirus origin in addition to the 5 mcg of spike protein, in each of your two doses.

In other words, the Novavax vaccine is not sufficiently purified. And no one can tell you how the insect and viral protein and DNA contaminants will affect you.

Anyone who tells you that the Novavax vaccine is a traditional protein vaccine is a scoundrel.  This vaccine is another “bait and switch” being rolled out solely to entice the unvaccinated, because it is not made of mRNA.

* But it still gives you a big dose of the spike poison.

There is a single other vaccine in the US that uses the fall armyworm-baculovirus platform to produce viral proteins.  It is one of about a dozen available flu shots, whose brand name is Flublok.  It too contains worm and viral DNA and protein.  See item 11 in its label.

Fourth, the regulators admit they have no idea if the vaccine works nor how dangerous it is. See below,  which is a screenshot I took from the ACIP advisory committee meeting on Novavax.

It makes clear that the regulators don’t know how much myocarditis the Novavax causes, nor whether it works against current variants.

But they still want you injected.  See the last line:  it will be important to figure out if it works or is safe after authorization.  Your tax dollars at work.  But the vaccine is “free.”

Will you be fooled again?

The post Novavax Vaccine Contains 1 mcg Armyworm and Baculovirus Proteins Injected into you with Each Dose first appeared on Health Impact News.