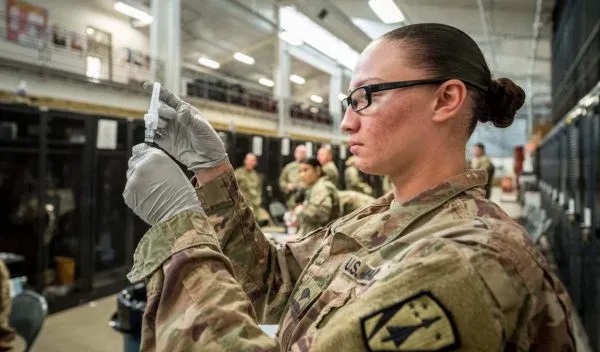 $6 billion in Covid-19 vaccine contracts awarded by Operation Warp Speed have been doled out by a secretive government contractor with deep ties to the CIA and DHS, escaping regulatory scrutiny and beyond the reach of FOIA requests.

Last Tuesday, while most Americans were distracted by the first US presidential debate, NPR quietly reported that the US government’s Operation Warp Speed, a public-private partnership launched by the Trump administration to rapidly develop and distribute a Covid-19 vaccine, had taken the unusual step of awarding contracts to vaccine companies, not directly, but through a secretive defense contractor.

Though NPR named the defense contractor—South Carolina–based Advanced Technology International—they declined to explore the company’s deep ties to the CIA, Department of Homeland Security, and the Department of Defense and how ATI is helping to lead those agencies’ efforts to militarize health care and create a surveillance panopticon that not only monitors the world around us but our physiology as well.

The “secret” vaccine contracts awarded through ATI as part of Warp Speed total approximately $6 billion, accounting for the majority of Operation Warp Speed’s $10 billion budget. Both Paul Mango, Health and Human Services’ deputy chief of staff for policy, and Robert Kadlec, HHS assistant secretary for preparedness and response (ASPR), personally signed off on the contracts.

Operation Warp Speed, which officially involves the combined efforts of HHS and the military to deliver over 300 million Covid-19 vaccines to Americans by next January, is a highly secretive program dominated by military personnel, most of whom have no experience in health care or vaccine production.

The Trump administration has often compared Warp Speed to the Manhattan Project, which produced the atomic bomb.

Several very unsettling revelations about the true nature and scope of Warp Speed, including the out-sized role of ATI, began to emerge starting last Monday.

Yet, most of this new information was not covered by US news outlets due to the media frenzy surrounding the first presidential debate and the subsequent news that President Trump and several other politicians and White House officials had tested positive for Covid-19.

NPR noted that the decision to use a nongovernment intermediary like ATI to issue the coronavirus vaccine contracts, as opposed to the government itself directly awarding those contracts, allows Operation Warp Speed to:

This means that, among other things, the vaccine contracts awarded under Operation Warp Speed are unlikely to be publicly released in the near future, if ever.

Continue reading the article at The Last American Vagabond.