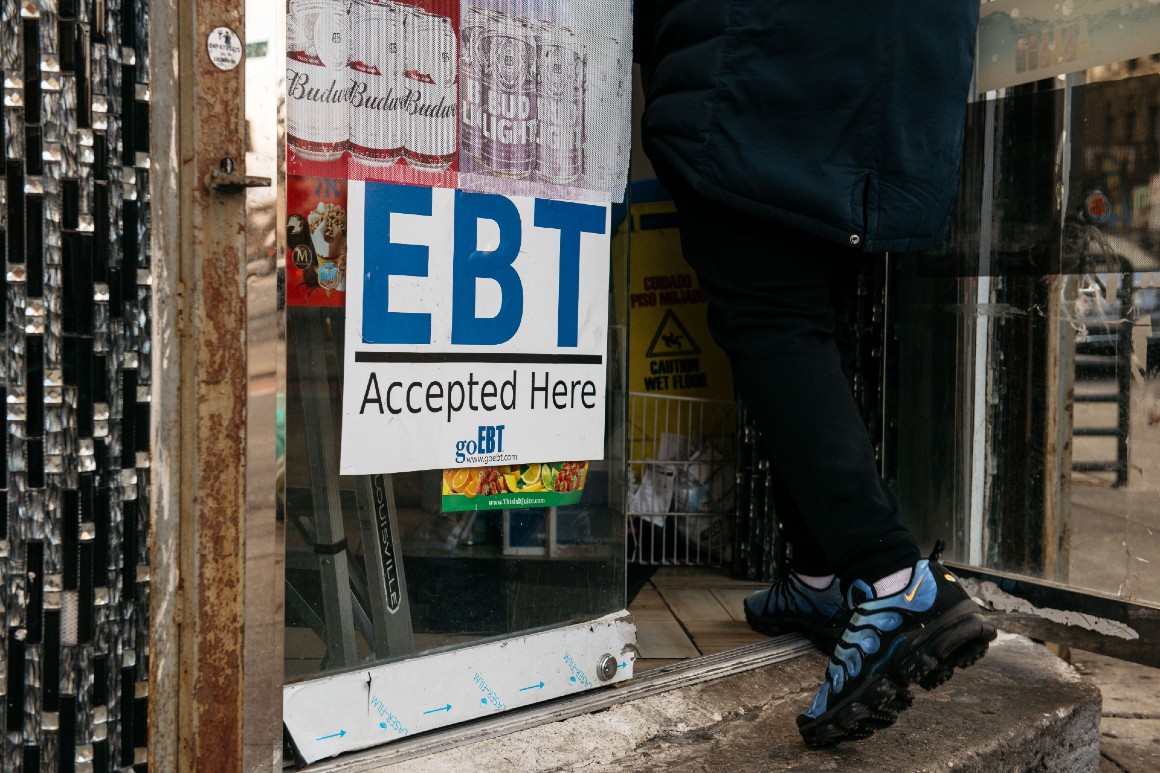 The Trump administration is fighting in federal court to block states from giving billions of dollars in emergency food stamps to the lowest-income Americans during the coronavirus crisis.

Residents of Pennsylvania and California have sued President Donald Trump’s Agriculture Department over a policy that has kept roughly 40 percent of households who rely on the Supplemental Nutrition Assistance Program from receiving any emergency benefits during the pandemic. After being ordered by a federal judge last week to proceed with the payments in the Pennsylvania case, the department is continuing to appeal.

The Agriculture Department says that it’s simply following the law. A spokesperson noted that a California court recently sided with USDA on a procedural matter.

Critics say the Trump administration is trying to return to its pre-Covid mission of shrinking safety net programs, even as economists warn more help is needed for businesses and millions of households that are newly unemployed, behind on rent and struggling to buy food.

“It’s almost like they’re singing that old song ‘Wishin’ and Hopin’,’ because they’re not dealing with reality,” said Ellen Vollinger, legal director at the Food Research & Action Center, of USDA.

The USDA’s policy has already kept roughly $480 million in nutrition assistance out of just Pennsylvania, a state that’s suffered a particularly high unemployment rate and also is a must-win for Trump in his bid for reelection, according to a POLITICO analysis of court filings.

The legal dispute centers on how USDA has interpreted language in the nearly $200 billion Families First Coronavirus Response Act, one of the big aid packages Congress passed in March.

The law requires USDA to grant state requests to distribute emergency allotments of SNAP as long as both the federal government and the state are under an emergency declaration due to Covid-19. But there’s disagreement about how to implement the requirement.

The law says the emergency payment can’t be higher than existing maximum benefit levels for SNAP, thresholds that are set by the size and income level of a household. USDA has taken this to mean that households already receiving the maximum benefit level each month before the pandemic — because they have little to no household income — are not eligible for any emergency payments.

Instead of giving all SNAP households emergency payments, USDA decided to bring all households up to the maximum payment levels. For a family of three, the maximum is $535 per month, which comes out to about $2 per meal per person.

“USDA’s position is consistent with congressional intent and the language Congress actually passed,” a department spokesperson said in an email.

One low-income individual who previously might have been getting $20 per month in SNAP benefits could be getting nearly 10 times that under USDA’s policy, while another low-income person who typically gets $204 per month has seen no increase whatsoever.

“It’s cruel that USDA interpreted it in such an inequitable way,” said Kathy Fisher, policy director at the Coalition Against Hunger in Philadelphia.

Anti-hunger advocates say Congress clearly intended for all SNAP recipients to receive emergency allotments and that the maximums only apply to the emergency benefit, not the total benefits for a given month.

Any household that qualifies for SNAP is already barely making ends meet and is particularly at risk during an abrupt recession, advocates say. In Pennsylvania, for example, the gross income limit for a family of three to qualify for SNAP is just over $2,300 per month, or roughly $28,000 per year. A full-time minimum wage worker in the state could earn as little as $7.25 an hour, or about $15,080 per year.

The USDA did allow states to boost assistance for millions of households whose incomes were high enough that they weren’t already receiving the maximum payment. That increased the benefits USDA pays out each month by 40 percent, or roughly $2 billion.

“These are unprecedented times for American families who are facing joblessness and hunger,” Agriculture Secretary Perdue said in a statement when USDA touted its benefits increases over the summer, adding: “Ensuring all households receive the maximum allowable SNAP benefit is an important part of President Trump’s whole of America response to the coronavirus.”

USDA also later announced it would bump up the maximum benefit levels by 5 percent in response to rising food costs.

While the increases were welcomed, even by the administration’s critics, anti-hunger advocates have argued the department should never have left off extremely low or no-income households during the crisis.

The legal fight over emergency benefits extends back to May when plaintiffs in California filed a class action lawsuit against USDA alleging the department was violating the law for excluding some 40 percent of SNAP recipients from the emergency payments.

The state of California is currently doling out some $250 million in emergency aid per month, according to court filings. Over the summer, a federal judge in the Northern District sided with USDA and did not order a preliminary injunction. The litigation is ongoing.

In July, Community Legal Services of Philadelphia and law firm Morgan Lewis filed a similar class-action lawsuit against the department on behalf of Pennsylvanians who did not have access to increased food assistance during the pandemic because of USDA’s interpretation of the law.

Last month, U.S. District Judge John Milton Younge of the Eastern District of Pennsylvania issued a preliminary injunction that blocked USDA from continuing to rely on its interpretation of the law, finding that it ran counter to Congress’ intent.

USDA has repeatedly asked the court to set aside the injunction. A federal judge in Philadelphia last week issued a decision accusing USDA of essentially flouting its injunction order — calling it an act of “egregious disobedience.”

The next day, the department said it would issue the additional emergency payments in Pennsylvania for the month of October, which meant recipients there would be getting an extra $59 million.

The fight over food stamps, which is heating up in the final days of the presidential election, comes as House Speaker Nancy Pelosi and Treasury Secretary Steven Mnuchin have failed to come to an agreement in time to pass another aid package before November 3.

But the administration is not giving up its fight against the additional aid for millions of households, even in a battleground state just days ahead of an election. Attorneys for USDA last week appealed to the Third Circuit and warned that if they are able to vacate the earlier injunction, the department will make the Keystone State pay the aid back.

“This reimbursement would not come from individual SNAP households,” the filing noted.

A spokesperson for USDA said if the plaintiffs are successful it would “exhaust the funds appropriated by Congress for these additional COVID benefits and result in a SNAP benefit cut for every SNAP beneficiary nationwide.” Judge Younge recently called this threat “a straw man argument resting on a dubious premise.” SNAP benefits have never been rationed due to a lack of resources and Congress has a long history of fully funding the program regardless of which party is in control.

There is a significant amount of money on the line, both at the individual low-income household level as well as the macro-level. Economists consider SNAP benefits one of the quickest ways to infuse money into local economies because virtually all of the benefits are spent within a month of being issued.

Agriculture Department economists have estimated that every $1 spent on nutrition assistance during a downturn, there’s about $1.50 of economic activity that results.

In Pennsylvania, state officials have outlined a plan for getting emergency allotments to households that haven’t previously been eligible. Under the plan, a four-person household would receive an additional allotment of $340 each month.

Groups in Pennsylvania are also seeking back payments going all the way to March, a request worth nearly half a billion dollars that would be spread across hundreds of thousands of low-income households. The court has not yet decided whether retroactive payments are warranted.

“In the meantime,” said Vollinger, an anti-hunger advocate at FRAC. “People are not getting the help that they need.”

A Beginner’s Guide to Hiking: Everything You Need For Your First Hike!

Before you step foot in the great outdoors, read this

Incorporating fresh vegetable and fruit juices in someone’s life can

Increasing Awareness Related to the Advantage of Organic Food Will Augment the Global Bio-Agriculture Market in the Forecast Period of 2021-2026 | Msnho!