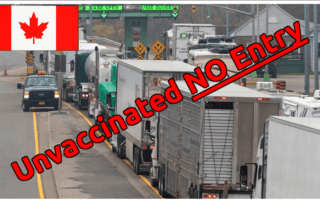 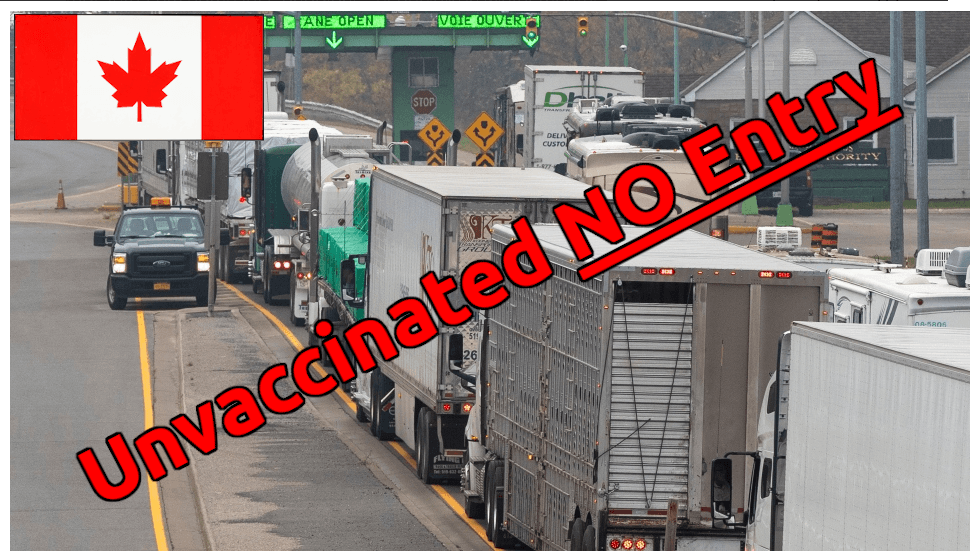 A COVID-19 mandatory vaccine requirement for all non-U.S. citizens coming across the borders from Canada and Mexico that includes truck drivers went into effect today, Saturday, January 22, 2022.

The U.S. Department of Homeland Security confirmed that it will require non-U.S. individuals – including truck drivers – seeking entry into the United States from Canada and Mexico to provide proof of vaccination beginning Saturday, Jan. 22.

“Starting on Jan. 22, the Department of Homeland Security will require that non-U.S. individuals entering the United States via land ports of entry or ferry terminals along our northern and southern borders be fully vaccinated against COVID-19 and be prepared to show related proof of vaccination,” Secretary Alejandro N. Mayorkas said in a news release. “These updated travel requirements reflect the Biden-Harris Administration’s commitment to protecting public health while safely facilitating the cross-border trade and travel that is critical to our economy.” (Source.)

Each country’s rule prevents unvaccinated or partially vaccinated foreign national truckers from crossing the border. Both rules have been criticized because they could create more supply chain disruptions.

Bloomberg reported this week that Canada’s rule already has led to a surge in produce prices. George Pitsikoulis, president of Montreal-based distributor Canadawide Fruits, told Bloomberg that the cost of transporting produce out of California and Arizona to Canada jumped 25%. In addition, a recent Wall Street Journal article stated that two-way trade in merchandise goods between the United States and Canada totaled more than $600 billion in 2019. It is estimated that about 80% of those goods moved on trucks.

The rules could lead to a significant reduction in truckers willing to cross each country’s border. The American Trucking Associations estimates that about half of truck drivers have not received the COVID-19 vaccine. According to an OOIDA Foundation survey from April 2021, about 75% of OOIDA’s members who responded said they didn’t plan to receive the vaccine.

Besides higher prices, food shortages have also been reported in Canada this past week.

Canada’s vaccine mandate for truckers came into effect on Saturday. The new rule requires US truckers to be vaccinated to cross the border. We warned earlier this week such a mandate would have “consequences.”

The vaccine mandate has exacerbated the shortage of truck drivers and made wait times at border crossings even longer. Eighty percent of trade between the US and Canada is transited by truck. America exports about 90% of Canada’s fruits and vegetables during the winter season. As shipments decline because only about half of US truck drivers are vaccinated, grocery stores report shortages.

A rolling protest by a transport convoy at the Manitoba border crossing has already led to major delays for travellers hoping to cross into the US.

According to one driver, trucks are blocking all lanes at the border as they slowly follow a circular route along Hwy. 75 while blasting horns in opposition to the federal government.

A Canadian truck convoy, The Convoy For Freedom 2022, has started with Canadian truck drivers from all parts of Canada heading to the Canadian capital in Ottawa for a rally next Saturday, January 29, 2022. There is a Gofundme page setup to solicit funds for the truck drivers to help with their expenses in driving to Ottawa, and it has already raised more than $1.6 million.

A group of truckers is planning to drive across the country to protest a federal vaccine mandate in Canada’s capital.

The first leg of the convoy, dubbed The Convoy For Freedom 2022 , is set to leave B.C. on Sunday. Convoy organizers plan to arrive in Ottawa on Jan. 29, where truckers from other provinces will join.

“I know a lot of drivers who are impacted by this. It has basically removed them from the workforce,” B.C. truck driver Colin Valentim told the Vancouver Sun .

Valentim will lead the B.C. leg of the convoy taking the western route and expects to be accompanied by others along the way. Two other convoys have different starting points: The eastern route is to begin on Jan. 27 in Enfield, Nova Scotia. The southern route will leave on the same day from Windsor, Ont.

A Go Fund Me page for the cause has raised more than ($1.6 million) to help with food, lodgings and fuel for the truckers.

The decision for Canadian truckers to meet in Ottawa to protest the vaccine mandate comes as the industry struggles with issues , such as disruptions to the supply chain and a shortage of drivers.

The federal vaccine mandate could result in a loss of 12,000 to 16,000 cross-border commercial drivers, according to the Canadian Trucking Alliance. (Source.)

There is as of now no vaccine mandate for truck drivers entering Mexico, but depending on how strict they are at the Mexican borders on enforcing the U.S. mandate on Mexican truck drivers, this could have devastating impacts on the U.S. economy.

The top imports from Mexico are:

Over one fifth (22%) of U.S. imports from Mexico are classified as machinery and electrical products—items like televisions, household appliances, and smartphones. Mexico is a major manufacturing hub for some of the largest global brands, including Samsung. The South Korean electronics giant sources much of its Amazon-bound inventory from Querétaro.

Chemical products make up nearly 15% of U.S. imports from Mexico in 2020. This includes household staples like soap, garden fertilizer, and multivitamins.

Some of the world’s largest brands source their chemical products from Mexico. , for example, imports its toothpaste from Monterrey.

Just over 10% of the U.S.’s 2020 imports from Mexico are classified as vegetable products.  A broad category, Vegetable Products includes plant products like fresh-cut flowers, dried fruit, and an Amazon staple: roasted coffee beans.

Beloved by caffeine lovers, Mexican beans account for much of the global supply of coffee, including 60% of the world’s organic coffee.

The top imports from Canada are:

Canada’s largest export to the U.S., by far, is crude oil with the vast majority coming from Alberta’s oil sands to the Western and Southern U.S.

Combining the large and medium-sized passenger vehicle categories, car exports make up approx. 13% of Canadian exports. Canada’s automobile-related exports are a legacy of the Auto Pact under which American car companies set up plants in Canada and parts were shipped back and forth across the border.

Like oil, most of the natural gas is produced in Alberta. Using a similar distribution pattern as oil, Canadian exports go from Alberta into the Western and Southern U.S.

Potassium chloride is found in potash, which is used to make the world’s fertilizers. Saskatchewan is the second largest producer of potash in the world.

Canada is a major exporter to the U.S. of non-monetary gold – bullion, powder or any other semi-manufactured form. It does not include watches or jewelry. Although the United States is a net exporter of gold, much of its production depends on higher prices for gold to make it profitable.

Canada is the United States’ main supplier of wood.

Unmasking The Global Food Cartel: Is Massive Starvation and Population Reduction Their Next Move?